Twitter has hidden a tweet by President Donald Trump from his profile, saying it violates rules about glorifying violence.

It did the same hours later when the official White House account tweeted a copy of the president’s words.

Instead of being deleted, both tweets can be viewed by clicking on a prominent warning.

It says that “Twitter has determined that it may be in the public’s interest for the Tweet to remain accessible.”

This is the latest twist in an escalating row between Twitter and the White House. 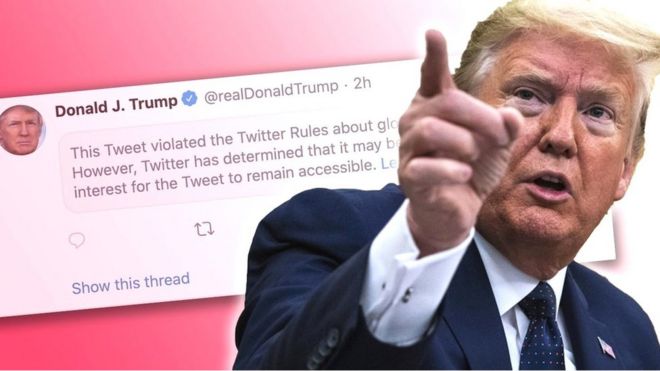 The US president finds himself in unexpected company alongside other world leaders whose tweets have been censored.

In February 2019, Twitter had a tweet by Iranian Leader Supreme Ayatollah Ali Khamenei removed after it appeared to threaten author Salman Rushdie.

Mr Trump was tweeting about the US city of Minneapolis, which has seen consecutive nights of protests following the death of a black man in police custody.

The president said he would “send in the National Guard”, and followed that up with a warning that “when the looting starts, the shooting starts.”

Twitter’s policy of adding a warning to, rather than deleting, tweets that break its rules when it comes to major public figures was announced in mid-2019. But the social network has never used it on Mr Trump – nor deleted any of his tweets before.

“This is the bravest and riskiest thing I’ve ever seen Twitter – or any social media giant – do,” said Carl Miller, from the Centre for the Analysis of Social Media at UK-based think-tank Demos.

“This pours rocket fuel over the online-harm-versus-free-speech debate. Online content policy doesn’t get more incendiary than this.”

On Friday, the president sought to clear up the tweets by saying he was misunderstood.

“Looting leads to shooting, and that’s why a man was shot and killed in Minneapolis on Wednesday night – or look at what just happened in Louisville with 7 people shot,” he tweeted.

Seven people were shot in Louisville, Kentucky, at a protest over the death of Breonna Taylor, who was shot by three white police officers in March.

“I don’t want this to happen, and that’s what the expression put out last night means,” he wrote.