As the news of the crash united the world in grief, an outpouring of shock and sadness spread on social media.

In a post on Twitter, Ethiopian Prime Minister Abiy Ahmed’s office expressed its “deepest condolences” to the families of the victims, while authorities declared Monday a day of national mourning. Nine Ethiopians were killed in the crash.

Social media users sent their prayers to the families and victims of the “tragic accident”, while others expressed agony as they waited to find out whether their relatives were on board the flight or not.

Condolences to the people of Ethiopia plus the friends and relatives of all those on board the Ethiopian Airlines flight that crashed earlier today. As investigations continue as to what actually happened, we pray for those who have lost their lives in this tragic accident. #RIP

Salim Amin, son of renowned photojournalist Mohamed “Mo” Amin, who was killed in 1996 when an Ethiopian Airlines flight crashed off Comoros during a botched hijacking, took to Twitter to express his “sincere condolences” but also praised the carrier’s safety track record.

“I remember when I lost my father on #ET961,” Amin, chairman of Camerapix and founder of The Mohamed Amin Foundation, wrote.

“But that was no fault of the amazing @flyethiopian,” he added, as he remembered Mo Amin who died when his flight Ethiopian Airlines Flight 961 was hijacked and crashed into the ocean.

My sincere condolences to all those who may have lost loved ones aboard #ET302 flying to #Kenya. I remember when I lost my father on #ET961 but that was no fault of the amazing @flyethiopian. ET is one of the safest and most efficient carriers in the world @PMEthiopia. pic.twitter.com/HVuuL2RN2g

With 32 people on board the Flight ET 302 hailing from Kenya, the East African country suffered the most losses in the accident.

Among the victims was Hussein Swaleh, the former secretary-general of the Kenyan football federation, who was due to return home after working as the match commissioner in an African Champions League game in Egypt on Friday.

“Sad day for football,” Nick Mwendwa, the president of the federation, wrote on Twitter.

Sad day for football. You were doing what you loved most. Fare thee well my chairman. Until we meet again. pic.twitter.com/WnOh4c3Pxh

At the airport in the Kenyan capital, meanwhile, weeping relatives and friends begged for answers.

ALSO READ:  List of Countries that have grounded the Boeing 737 MAX 8 aircraft after the Ethiopian Airlines flight ET302 crash

“I feel very weak. I wish they can give me information so that I can accept and move on,” Edward Gathu, whose brother, Benson, was on the flight, told Al Jazeera.

Kenya’s President Uhuru Kenyatta offered prayers for the family members and loved ones of those on the flight.

We are saddened by the news of an Ethiopian Airlines passenger aircraft that is reported to have crashed 6 minutes after takeoff en route to Kenya. My prayers go to all the families and associates of those on board.

Nairobi is due to host a UN environmental conference on Monday, and Antonio Guterres, the world body’s chief, confirmed in a statement that among the victims were UN staff.

Guterres said he was “deeply saddened” by the crash and sent his sympathies to the families of the victims.

Deeply saddened by the news this morning of the plane crash in Ethiopia, claiming the lives of all on board. My heartfelt condolences to the families and loved ones of all the victims — including our own @UN staff — who perished in this tragedy.

The WFP family mourns today — @WFP staff were among those aboard the Ethiopian Airlines flight. We will do all that is humanly possible to help the families at this painful time. Please keep them in your thoughts and prayers.

987 people are talking about this

Meanwhile, the UN High Commissioner for Refugees Filippo Grandi expressed “great sadness and shock” as colleagues were among the victims.

His office said it was working to determine how many of the refugee agency’s staff were on board the plane.

521 people are talking about this

In Canada, the country with the second-highest number of victims, Prime Minister Justin Trudeau also took to Twitter to express his grief, including for the 18 Canadians who perished.

“Devastating news from Ethiopia this morning,” he wrote.

“Our thoughts are with all the victims on flight ET302, including the Canadians who were on board, and everyone who lost friends, family, or loved ones.”

Devastating news from Ethiopia this morning. Our thoughts are with all the victims on flight ET302, including the Canadians who were on board, and everyone who lost friends, family, or loved ones. Canadians in need of assistance, contact sos@international.gc.ca or 613-996-8885.

1,528 people are talking about this

An Italian aid group that partners with UNICEF in northern Africa said one of its founders, Paolo Dieci, was among the dead. UNICEF Italy sent a message of condolences

Translation: Condolences for the aerial tragedy that took place a few hours ago in #Ethiopia.

Among the many victims [was] Paolo Dieci, president of the @CISPorg partner at UNICEF in Kenya Lebanon and Algeria.

In total, eight Italians were killed. Three belonged to the Bergamo-based humanitarian group Africa Tremila and one was the Sicily regional assessor to the culture ministry, officials said.

France‘s government said eight of its citizens were among those killed and announced the opening of a crisis center for their families.

The Paris prosecutor’s office said it had launched an investigation into the crash, without elaborating. It is a standard procedure when French citizens are killed abroad.

My sincere condolences to the families and friends of the Ethiopian Airlines flight’s victims, among which several French citizens. We share their sorrow. France stands by the people of Ethiopia and Kenya, and expresses its full solidarity.

511 people are talking about this

UK Prime Minister Theresa May expressed sadness at the “devastating” news. Seven British citizens were among the victims.

“I was deeply saddened to hear of the devastating loss of life following the plane crash in Ethiopia. At this very difficult time my thoughts are with the families and friends of the British citizens on board and all those affected by this tragic incident.” – PM @Theresa_May

Germany‘s Foreign Minister Heiko Maas released a statement paying tribute to the victims of the crash, including his five compatriots among them.

“Today we received the news of the terrible crash of the Ethiopian airlines plane in the direction of Nairobi which has killed so many people. In these hard times, our thoughts are with the families and relatives of the victims, to whom I express my heartfelt condolences,” Maas said.

Angela Merkel‘s spokeswoman Martina Fietz said on Twitter that the German chancellor expressed her “deeply felt condolences and sympathy for the relatives of the victims”.

The foreign ministry of Somalia, which also lost one citizen, offered its “sincere condolences”. 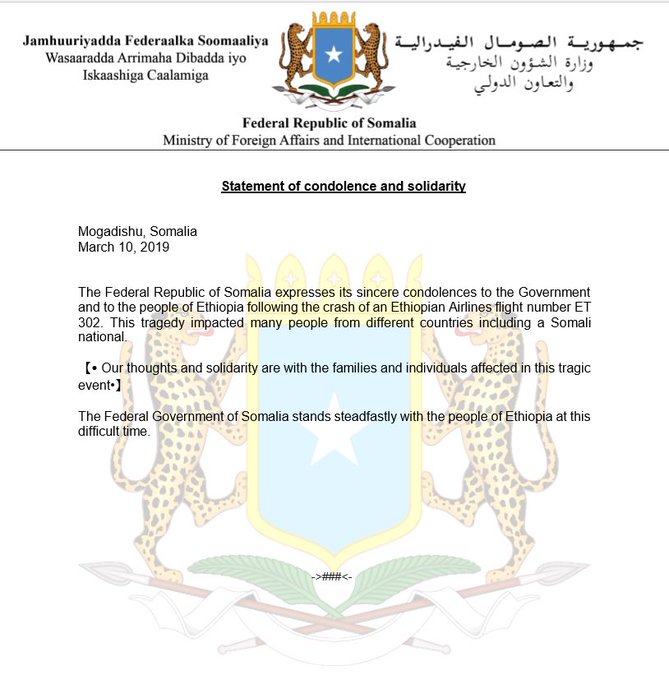 #Somalia expresses its sincere condolences to the Government and to the people of #Ethiopia following the crash of an #Ethiopian Airlines flight number ET 302. This tragedy impacted many people from different countries including a #Somali national.http://www.mfa.gov.so/wp-content/uploads/2019/03/Ethio.pdf …

Nigerian President Muhammadu Buhari extended his sincere condolences to Ethiopia, and to all the countries that lost citizens.

I am profoundly saddened by the news of the crash involving @flyethiopian, one of the world’s most successful and efficient Airlines. On behalf of the Govt & people of Nigeria, I extend sincere condolences to PM Abiy Ahmed of Ethiopia, and to all the countries that lost citizens.

“The spirit of Africa will keep on soaring,” she said.

Our deepest condolences to all those impacted by the shocking & sad #ET302 tragedy. Devastating loss! 🕊 The spirit of #Africa will keep on soaring. pic.twitter.com/4raNgZF4Gu

Impeachment proceedings used to be news of unquestionable gravity. The week showed it’s just more fodder for the ideological and...

A body of a man was discovered in his house on Saturday morning after what is believed to be as...

WASHINGTON (AP) — The U.S. is awaiting retaliation from China over increased tariffs, after talks in Washington ended without a...

COPENHAGEN (Reuters) - Denmark’s richest man Anders Holch Povlsen and his wife lost three of their four children in the...

A father is alleged to have invited his daughter’s rapist to his house for dinner before torturing him to death....

Bizzare women’s cycling team kit that will shock you

The designer of the uniform for the Colombian women’s cycling team decided to put a flesh colour in the most...