BREAKING: Twitter accounts belonging to Elon Musk, Bill Gates, CashApp, and others hacked to promote Bitcoin scam; more than $53,000 has been paid so far.

No, sending your bitcoin to a random digital address will not magically result in twice as much bitcoin being sent back to you.

And yet, the verified Twitter accounts of Elon Musk, big tech companies, and major cryptocurrency exchanges were all promising that very thing Wednesday in what appears to be yet another iteration of the oldest scam in the relatively young crypto-scam book. 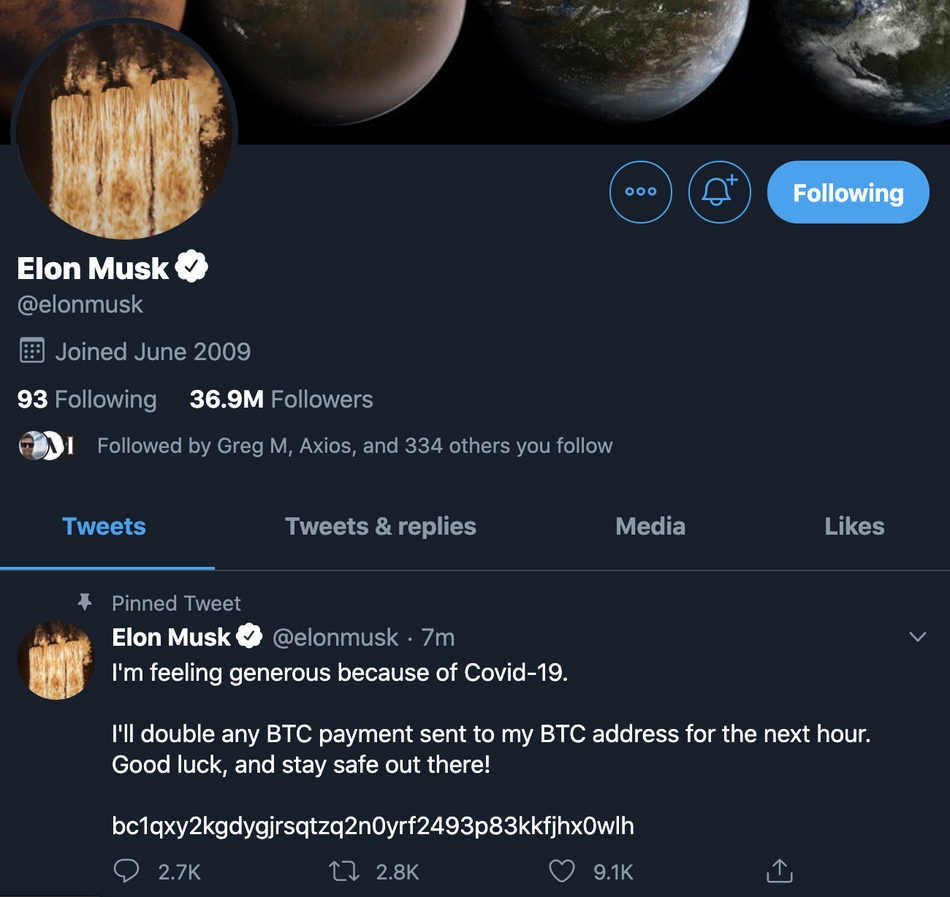 Twitter accounts belonging to Musk, Bill Gates, Coinbase, Binance, Gemini, Kraken, and Binance’s CEO CZ all tweeted links to a site claiming to be giving away bitcoin — all you had to do was send a little its way, first.

“I’m feeling generous because of Covid-19,” read the now-deleted tweet from Musk’s account. “I’ll double any BTC payment set to my BTC address for the next hour. Good luck, and stay safe out there!”

Notably, as of the time of this writing, some of the accounts had removed the scam giveaway. Others, like @CZ_binance, had not.

We reached out to both Twitter to confirm that these verified accounts were indeed hacked, and to ask if some third-party account management platform was at fault. In 2019, the Twitter account of Twitter CEO Jack Dorsey was compromised via a third-party service called CloudHopper. We received no immediate response.

We also reached out to Coinbase for comment, but likewise did not immediately hear back.

If someone did happen to click on the cryptoforhealth.com link (and please, do not), they would be taken to a website purporting to offer cryptocurrency payouts.

“To participate you just need to send from ~0.1 BTC to 20 BTC to the contribution address and we will immediately send you back 0.2 BTC to 40 BTC to the address you sent it from (x2 back),” promises the site.

In the past, scammers have set up lookalike accounts in the hopes of tricking users into sending cryptocurrency their way. Now, it seems, they’ve done one better — take over the real deal.

UPDATE: July 15, 2020, 1:51 p.m. PDT: Twitter has apparently not been able to resolve the issue, and Musk’s account is still tweeting scam links.

You know I living giving back to my community.

Tell your family & friends! Only going on for 30 minutes.